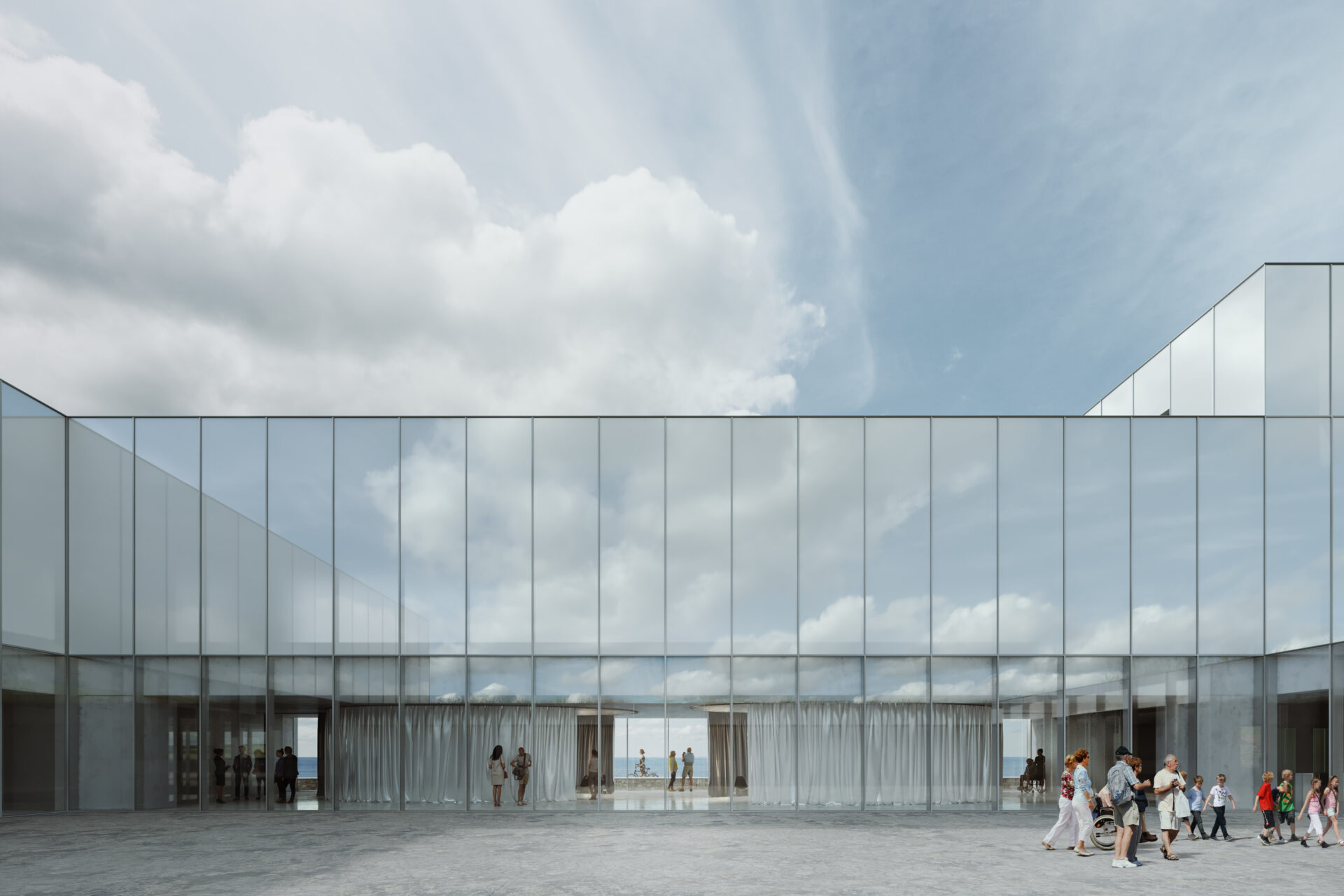 In this project, the Ateliers Adeline Rispal wanted to propose a journey through the history and importance of the artificial port of Arromanches in the D-Day landings, while resituating this operation, for the visitor experience, in the general history of the Second World War conflict.

Museum of the D-Day Landings

At a time when the human and material witnesses of the event are disappearing, it is not insignificant that the D-Day Museum in Arromanches is undergoing a salutary transformation and is attempting to capture what is still visible of the military landscape before the water definitively covers the last vestiges. Underwater archaeology has already taken over to feed historiographical research.
When the architectural project weaves strong links between the history of the place and the landscape of the remains of the port, the scenography immerses itself in the landscape to the point of melting into it by completing what is not or no longer visible in the landscape. It is thus an augmented vision of the site at the moment when its traces disappear.
The two introductory spaces and the C4 space which concludes the tour are located in the original building and thus reinforce these links between the site, history and the memorial history of the D-Day landings.

The scenographic principles specific to the exhibition space

The scenography of the D-Day Landing Museum further reinforces these links between architecture and history by capturing both the natural and historical power of the landscape and by borrowing the aesthetic codes of the ingenious enterprise that was the design and construction of this port. She is inspired by the fragmentation of material elements to make them transportable from England and to assemble them on site in a very short time.

The light of this coast is found in the building and its exhibition spaces, it is valued as an essential element in the apprehension of the site, changing, provoking a thousand shades of colour from the sea and the sky. It is present, filtered throughout the exhibition, and the layout of the sensitive collections takes this into account: the display cases concerned turn their backs to the light, while the large objects such as the vehicles are displayed in their action landscape.

The interior materials of the room, floors, walls and ceiling, all made of quartz concrete, capture the variations in light to better immerse visitors in the beauty of the landscape.
The walls of the large room differ greatly depending on the orientation:
– the opaque partition above the access ramp at the beginning of the chronological tour, both to express these dark years and to protect the sensitive collections from the southern light; it opens up at the beginning of space D Day;
– the façade on the forecourt is closed except for a horizontal bay which reveals the Normandy coast of the D-Day landings from the corresponding section;
– the northern facade on the sea, entirely open, imports the landscape into the exhibition.
– The east wall is opaque and serves the vertical circulations.


The constructive framework of the architecture of the old museum allows us to define a framework for the new building and for the scenographic project of the D-Day Museum.
The decision to create fragmented and mobile furniture inspired by the Phoenix caissons and, within this same framework, to ensure the flexibility of the exhibition during the time of its conception and its capacity to be renewed on the large free plateau and over the long term of the museum.

The organisation of the sequences on the set

After viewing the introductory film in their respective rooms, individual and group visitors access the museum stage on level 1 via the ramp or lifts.
The first chronological sequences (B1, B2 and B3) are spread out over the southern part of the plateau along the ramp and up to the western façade which opens up sequence B3 onto the landscape of the Normandy coast, the scene of the D-Day landings.
Sequences C1 and C2, which are more thematic, occupy the rest of the western zone, with the animated models facing the maritime landscape to the north.
Sequence C3, dedicated to the functioning of the port of Arromanches, occupies the rest of the northern part of the plateau.
Sequence C4 begins on level 2 of the access to the terrace and continues at the end of the tour on the ground floor in the old building.
The collaborative work of the architects and scenographers throughout this study phase enabled the sequences to be articulated according to the museographic programme, the constraints of conserving the collections, the functionalities of the building and its relationship to its environment.

The flow of visitors to the D-Day Museum has been calculated for a large number of visitors, based on the maximum capacity of the building according to fire safety constraints.
Nevertheless, the principle of mobile furniture will allow for adjustments to be made to the flow of visitors, if necessary.