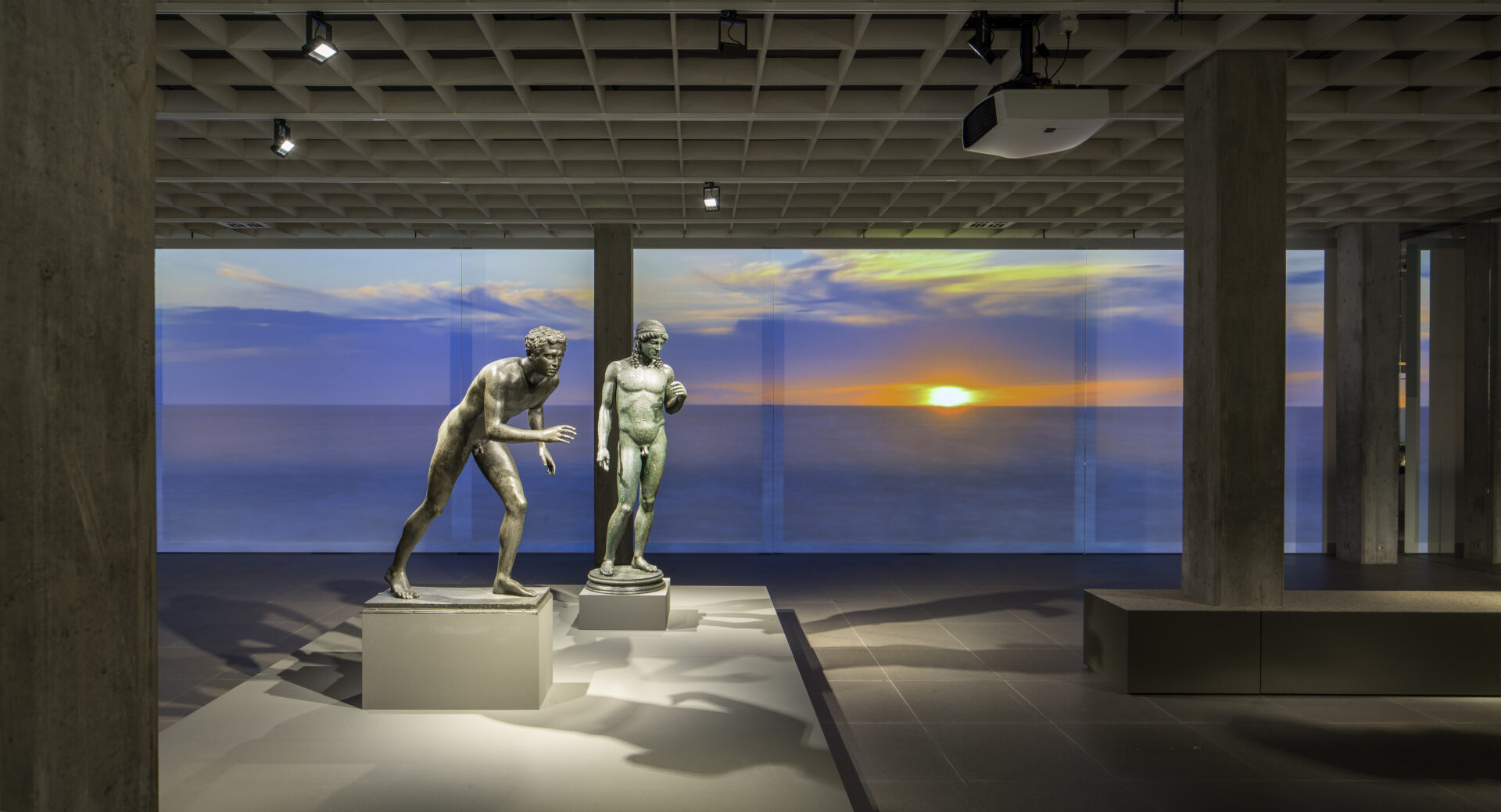 Exhibition "The Sunken Treasure - The Shipwreck of Antikythera" - Antikenmuseum Basel

An immersive exhibition design serving the narrative of the sinking of a Roman ship off the island of Antikythera and transporting works of Greek antiquity to Rome.

The exhibition “Antikythera” links to the new excavation campaigns carried out in 2014 and 2015 in the wreck of Antikythera.

This exhibition will present the remains found, including the reconstitution of the Antikythera mechanism and the Ephesus, two key pieces in this collection.

The exhibition will cover about 800 m² on levels -1 and -2 of the Basel Museum of Antiquities and the Ludwig Sammlung.

The exhibition route plays with the different levels of the museum.

The horizon line becomes the sea level, and the more the public moves through the exhibition, the more they feel this line, which ends up submerging them.

The contrast between light and dark is also an integral part of the scenography, this work is done to differentiate the themes and the spaces but also to guide the public in their journey, sometimes attracted by the light, sometimes by the darkness.

The public enters the exhibition by descending a staircase, as if going back in time to the Ancient period. In the first room, the visitor’s gaze is lost in the horizon line drawn by the sea, a boat leaves for other lands. The Roman colonnades play with the architecture of the museum as if they were one.

Then the visitor begins his journey on board the ship, he discovers the life on board between crew, cargo, travel, daily life on board a ship of the ancient time…

The journey continues but unfortunately the sea gets rough and the audience is caught in the waves and eddies of the sea. As they descend the ramp, they gradually sink under the water to discover all the treasures that have been lost there.

The ship has sunk with all the wealth it carried. In the depths of the sea, shadows of swimmers greet the visitors, walking and swimming through the works and objects that have disappeared into the ground. Rare rays of sunlight pierce this expanse of water as if to restore their former brilliance.

The public then arrives in Greece, clarity and white veils dress the space. Visitors discover the Greek (masterpieces) that have inspired other civilizations. It is also the discovery of knowledge: philosophy, literature, science, many things that Greek culture has brought us.

The last area of the exhibition takes the public on a journey through the stars and planets, and they find themselves lost in the galaxy. Time passes through the light years of knowledge that the Antikythera Mechanism reveals to us.