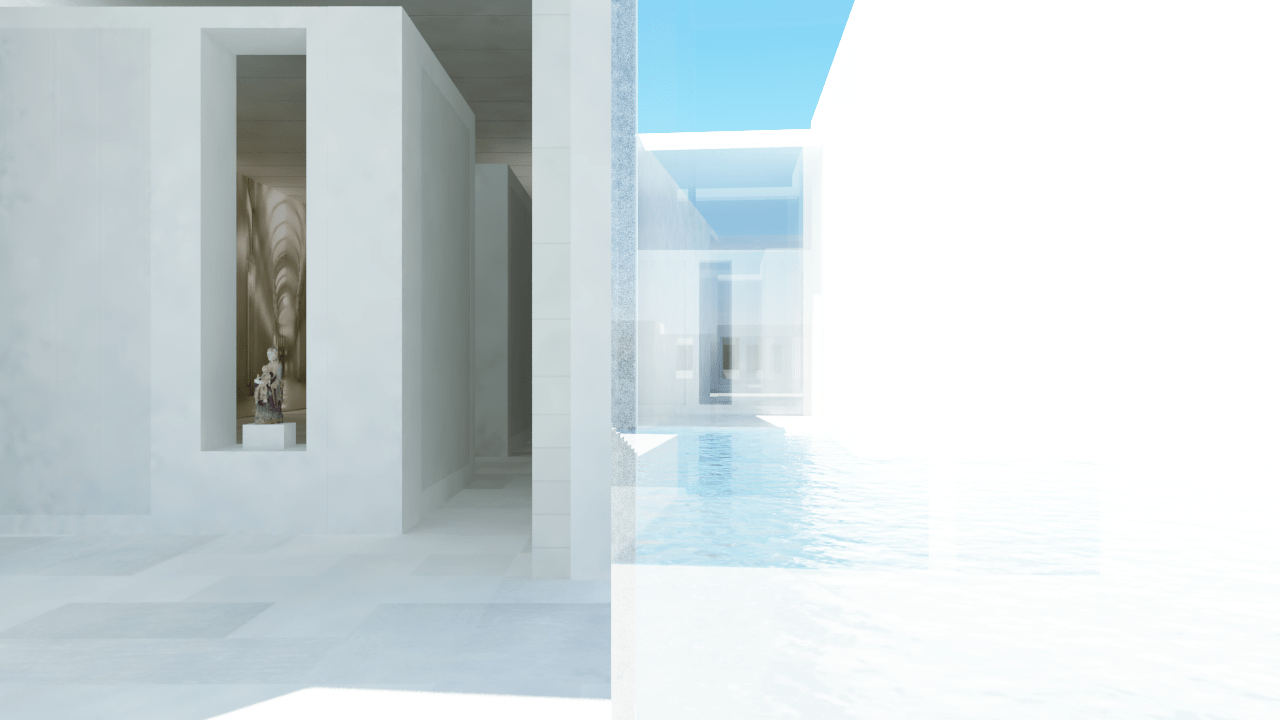 Lying on the water, Jean Nouvel’s Louvre Abu Dhabi Museum takes the site as a showcase and installs the collections in a luminous atmosphere that speaks as much about oriental architecture as it does about ancient Greece or a dream city. It is this “museum-city” that the exhibition design project inhabits, by slipping as delicately as possible into this landscape whose serenity must not be disturbed.

The spirit of the place: the time of the meeting

Lying on the water, the Louvre Abu Dhabi Museum takes the site as a showcase and installs the collections in a luminous atmosphere that speaks as much about oriental architecture as it does about ancient Greece or a dream city.

In this timeless place, the visitor abandons his inner fortress to let himself wander, the one that promotes encounters with the Other through works that dialogue beyond time and space and that let him enter into their age-old conversations.

It is therefore in this “museum city”, an imaginary palace, that the interpretive planner’s project lives, slipping as delicately as possible into this landscape of light and water whose serenity must not be disturbed by anything.

It is therefore the time of the meeting that the Louvre Abu Dhabi museum offers to the visitor for an exceptional moment on the island of Saadiyat.

In the museum city, the palace and its rooms

The walk between shadow, light and water extends into the spaces of the museum which, like the Louvre in Paris, is a palatial complex in the heart of the city. Interpretive planners at the heart of this dream palace, with its walls, form a double envelope that protects the intimacy of visitors’ encounters with the works of man. This double skin also allows all levels of protection of these works against climatic excesses. The rooms of the palace create diverse relationships between the works, the architecture and the landscape. Their walls of varying porosity are constructed and deconstructed according to the works they house and which they place in a confrontational situation. They open up differently according to the strategies of contextualization.

The galleries, located between the walls of the palace and the rooms, run throughout the museum. Sometimes open to the rooms, sometimes dark, sometimes bathed by the sun that the architecture allows to penetrate, they are the privileged place of wandering and expression of the link between art and its natural, architectural and cultural context.

Built on the lines of oriental and European cities, the walls of this imaginary palace are the guardians of the memory of the world, of its intangible heritage. Sometimes, they themselves become immaterial in order to deliver to curious visitors their buried wealth. Niches dug into the walls allow visitors to rest in sound atmospheres linked to the collections.

The entire architectural and exhibition design system is designed to allow the greatest flexibility in exhibiting the collections, for which annual rotation is one of the major challenges.